About two months ago, I found myself without anything to watch on Netflix. I had just finished a spree of crime documentaries and wanted something different.

I was tired of the same type of show. I didn’t want to watch anything that had cops, detectives, or could be described as “dark”. I wanted something out of my comfort zone.

So I made it my mission to look for shows that I’d otherwise not watch. You never know what might stick.

I’d used that method last year and it resulted in me watching a movie – a romantic comedy called, Table 19.

Lo and behold, I enjoyed it, even though the whole thing was the exact opposite of what I thought I’d like.

“Everything you want is wrong.”

With that in mind, I went show searching.

The first show I found was called, Between. It was about a mysterious virus and a town and people and…I stopped watching after three minutes. I wasn’t feeling it.

I’m also now realizing that Netflix describes the show as “dark”. No wonder I didn’t get far. I didn’t want “dark”.

Then I found myself clicking on Goosebumps. An old classic! I had no interest in watching it, but I looked to see if they had a specific episode – the one where my childhood babysitter was the main character. I was curious.

They had it. I watched two minutes and moved on.

Next, I clicked on a show called, Cheer Squad. This is when I knew I was getting desperate. I clicked on it because it was a behind the scenes documentary style show about a cheer team.

I thought, I’ve watched shows like this for football, maybe it could work.

It didn’t work. Less than five minutes later, I was done with it.

Then I found a show called, The World’s Most Extraordinary Homes. Alright, this could be cool. Maybe it will give me some inspiration. Maybe it’ll give me something to aspire to, like a hockey rink in the basement and a baseball diamond on the roof.

A few minutes in, I felt like I had aged myself 30 years. I was thinking about drainage systems and snow removal and all the stuff that professional adults worry about.

Feeling my innocence being taken from me, I clicked away from it.

By this point, I was putting the “aged” in “discouraged”, when it finally happened. 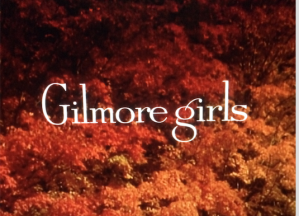 It was just sitting there on the screen, daring me to click it.

When I was a kid, my sister watched Gilmore Girls. She would try and get me to watch it, or call me over to see specific scenes that were “good”. I didn’t care.

Truthfully, I thought it was a girly show that was about girly things. I mean, the word “Girls” was in the title. I just assumed it was a show not meant for me. Besides, from the few seconds I did take in, I had determined that the characters talked way too fast.

Girly and too fast. I’d make fun of it and scoff at any recommendations to watch.

Multiple people would tell me I remind them of Luke from Gilmore Girls, they’d send a YouTube clip, and then I’d say, “Yeah I guess I am.”

But I still had no intention of watching.

So I clicked on it. It was happening. I was going to watch Gilmore Girls.

Dare I say I was wrong about the show?

It is not a girly show. The characters don’t talk too fast. If anything, I appreciate their quick-witted comebacks.

It’s a show about a mother and daughter, who are best friends, living in a small town with people who have eccentric personalities. I’ve yet to feel like I’m eavesdropping on a “girly show not meant for me”.

Do a lot of guys watch this show? Probably not. They probably have too much pride, or are like me, and thought the show was too girly.

If the main characters were a father and son, would more guys watch? I have no idea, but Gilmore Guys would be the title. Just wanted to get that in there in case it happens in the future.

I feel like we live in a time where there are no more “guy things” or “girl things”. Anyone can like anything. And from a male perspective, maybe we can start redefining what masculinity actually is.

There are all these phrases. Real men do this. Real men do that. I’ve never walked around asking myself if I’m a “real man”, or if I measure up to societal pressures. There are different kinds of masculinity.

I just try and be a respectful human being, who does the right thing, and enjoys an array of interests, while making jokes about most things.

I think that still makes me a man, doesn’t it? Then again, deep down I know I’ll always be 12 years old, so who knows?

Your actions define who you are. Who you are does not define your actions. Boom. Quote it.

Sure, you can call me a hypocrite for holding out on watching Gilmore Girls based on my misperceptions, but I’m also just stubborn sometimes. Get enough people telling me to do something, and I’ll do the opposite. I have to want to do something on my own accord.

Anyway, I just wanted to get that little spiel out.

Let’s talk about the show now. Most of these will be rapid fire thoughts.

The comparisons between me and Luke are about 80% accurate. I feel like I fully understand why he is the way that he is. He’ll be adamant against something, but that’s only for show. He can be talked into anything by Lorelai because he likes her and his resistance is just his way of not giving in too quickly.

He’s not actually cranky, that’s just a cover, which is always blown when someone needs his help at a moment’s notice.

As for Lorelai’s mother, I thought she had a British accent for the first few episodes. Then my sister told me she doesn’t; she just talks like a rich person.

That was an a-ha moment.

Grandpa Gilmore is great. Me and him would be friends.

In Season 1, when Dean was introduced, I thought it was the prototypical case of the network getting involved and telling the show runners that Rory needed a love interest.

So I thought he would just be there until the end of the first season, when he’d eventually do something dastardly that would send Rory home in tears, leading to a break-up.

Nope! They were a couple until Season 3, Episode 7!

Dean was weird. Didn’t he basically stalk Rory until she noticed him? His hair looked like he put on half at a time. It was very early 2000s. Rory looked too young for him. If Dean and Lorelai were a couple, I’d believe it.

What 15-year-old knows how to put a car together without any help? Just because he wore a leather jacket doesn’t make him a mechanic. I wasn’t buying it.

And then the way he broke up with Rory, let’s go through this.

There was a 24-Hour dance in the school gymnasium, which started at 6AM. The last couple left dancing, would win. Naturally, Lorelai and Rory were a team. They were joined by about 150 other couples.

As soon as it started, everyone took off to a flying start, like they were filming a musical. Meanwhile, I’m thinking, “CONSERVE YOUR ENERGY!”

Poor strategy by everyone.

Anyway, 23 hours pass and they’re down to the final six couples. One of the couples were senior citizens. I couldn’t believe it. More power to them, but I just figured this test of endurance would favour the younger participants.

Then they cut away from the dance, and Seth Cohen from The OC shows up to talk to Lane and her mother. Based on simple math, he showed up to “check out” the dance at 5AM. What? That makes no sense. That’s 2AM west coast time, which is still late. Go back to California, Seth.

Note: The actor who played Seth Cohen in The OC, also plays a character in Gilmore Girls. Now read that last paragraph again, if you didn’t understand.

Back to the dance. Dean starts yelling at Rory and breaks up with her because it’s obvious that she likes Jess, and hasn’t been interested in him since the beginning of Season 2.

Not sure where the show goes from here. Jess and Rory are now in their awkward phase.

Don’t answer that. I don’t want spoilers. But if they aren’t a couple by the end of this show, something is wrong.

Sookie is great. Took me a few episodes to realize it’s Melissa McCarthy.

Does Michel actually have that accent in real life?

Kirk looks like the kind of guy who would try out for television game shows, wouldn’t hear back, and then go to Blockbuster to pick out three movies and microwavable popcorn.

Paris is played by the same actress who plays Bonnie in How To Get Away With Murder. That took some getting use to.

Paris’ friend Louise, I recognize from a TV movie from 2002 called Double Teamed. She had brown hair in that movie, but the same voice, which is how I caught on.

Nothing gets by me.

Tristan got written out of the show because he had to go film One Tree Hill.

I felt like a very knowledgable viewer. I guess this is what happens when you wait 15+ years to watch a show.

I think that covers most of my thoughts on the show. If you want to hear my opinion on something I didn’t mention, ask me about it. Just don’t spoil anything.

So there it is in black and white.

I think of my blog as an all-you-can-read buffet. There's something for everyone and complimentary mints at the door as you leave.
View all posts by Paul →
This entry was posted in TV and tagged About Me, Culture, Gender, Gilmore Girls, Humor, Humour, Identity, Lifestyle, Netflix, Opinion, People, Television, Thoughts. Bookmark the permalink.