I’ve spent my entire existence wondering what my life would be like if I didn’t like sports. I still don’t have an answer. It’s a great mystery to me. Somebody get Scooby-Doo and the gang on line one.

How would I fill twenty-four hours in a day, if it weren’t for sports? I may never know.

When I was a kid, I’d fall asleep listening to sports talk radio at night, and I’d wake up to read the sports section of The Toronto Star. Sleeping was the unfortunate gap between the two.

My days revolved around me looking forward to 7PM and scheduling everything else around that magical time. Why? Because that’s when games would start.

I’d like to say that’s changed, but it hasn’t.

I remember back in first year university, a few friends were trying to lure me out to a Halloween party at the on-campus bar. Truthfully, I don’t drink, I’m not really a fan of parties, and Halloween doesn’t crack the Top 30 list of my favourite holidays.

But I couldn’t tell that to people I’d known for only two months. So I told them a different truth. It was, the Leafs game was on. Bam. My escape route. Sports. I wanted to watch the Leafs game. 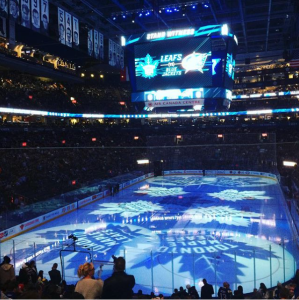 “Paul, the bar has plenty of TVs, you can watch it there.”

And in a nutshell, that’s me. The guy who would rather watch a meaningless hockey game in October, in their residence room by themselves, than go to a sweaty Halloween party at a bar.

The first sporting event I ever went to (at least, it’s the first one I remember) was in the late 90s. It was a baseball game at the SkyDome in Toronto.

I ate my McDonald’s meal. I stood for the national anthems. I got a mental image of the field, which I still have today. And then I fell asleep on my Dad’s lap.

I didn’t even make it to first pitch, which was scheduled for shortly after 7:00PM. They’d have to play the game and keep it down. Paul was sleeping.

Again, that’s me in a nutshell. Give me food, I’ll fall asleep. I don’t know where this “food gives you energy” myth comes from, but I’ve never experienced such a thing.

Watching a game on television versus being there in person, is two very different experiences.

When I watch on TV, my hand is held the entire time. Not literally, but in the sense that I don’t decide what I see or hear. I am guided through the entire experience.

The camera forces me to stare in a specific direction and the commentators force me to listen to their words. They tell the story. I’m just there to look pretty and eat chips.

When I watch a game in person, I can look anywhere I want. I can eavesdrop on a conversation behind me. I can watch someone walk up the aisle with food. I can use my nose to gage how tasty their food will be.

I can get distracted. I can miss a play. I don’t have the commentators in my head. I don’t have the “media storyline” imposed upon me. I’m told when to cheer. I’m pulled into doing the wave. I’m a far way away from my couch and an impromptu nap.

I’m surrounded by people who don’t wash their hands before exiting a public washroom.

Seriously, don’t touch anything at a sporting event. Just leave your hands in your pockets. Better yet, leave your hands at home. Saw them off at the wrist, leave them in a pickle jar, and put them back on when you get home.

I don’t say this as a germaphobe. I say this as a concerned citizen who has seen too many people pollute their hands and then place them on a railing or door handle.

Anyways, back to sports.

Going to a hockey arena or a baseball stadium was always a big deal to me, growing up.

I remember waking up one day and saying to myself, “Today’s the day. Today’s the big day!” as I put my socks on. I’m pretty sure I stole that line from an episode of Arthur. Nevertheless, I was headed to a sporting event that day and thought the quote was fitting.

I always like arriving early. An empty stadium with only a handful of fans in the stands is one of my favourite things in the world. If I could just bottle that feeling and make it last longer than twenty minutes, I’d be content.

Going to a baseball game and seeing the grounds crew water the dirt around the bases, had a huge affect on me as a kid. I’m serious.

I would play baseball in the backyard with my Dad, and on one occasion before we played, I started watering the grass. My Mom opened the window and asked what I was doing. I thought it was obvious what I was doing, but clearly she didn’t know this is what they did before baseball games.

I was told to turn off the hose.

Many years later I realized they water the dirt in the infield to limit the dust every time a player slides. If there’s another reason why they do it, don’t tell me.

Meanwhile, I was just water grass and making it slippery and uncomfortable for us to run in. Oops.

Every arena feels different. That’s one thing you can’t pick up when watching on TV.

I remember going to Maple Leaf Gardens before it closed. It was the only time I’d ever been there. It wasn’t even for a game. It was an open house. I ended up in the dressing room and still have photos of me in a Leafs jacket, standing in front of the stalls.

The place just felt special. It had an aura to it.

A few years ago, I went to an OHL game in the Niagara region, at the old Jack Gatecliff Arena. It was built in 1938.

In hockey, you’ll hear people refer to an arena as a “barn” or an “old barn”. I never fully understood what that meant until I walked into this arena. The smell met me at the door like a hug.

It smelled like an old barn. I finally got it. A mixture of popcorn, other food, and a warm blanket. That’s what it smelled like. I loved it. Three thousand people packed in there and watched a game.

Yours truly bought three 50/50 tickets at that game. They each had about an 8 or 9 digit number on them. The tickets weren’t in sequential order.

Why am I telling you this? Because one of my tickets came one number away from winning. ONE NUMBER.

The last number was one away. Again, you can’t get that kind of excitement, or disappointment, while watching at home.

Over the last few years, I’ve ventured on road trips to stadiums in different cities.

In 2014, I attended the Winter Classic at The Big House in Michigan.

That last sentence meant nothing to 97% of you, so I’ll explain.

On January 1, 2014, the Detroit Red Wings and Toronto Maple Leafs played a hockey game outside, in front of 105,491 people, at a football stadium.

I couldn’t feel my feet for five hours and I loved every second of it.

I don’t think I’ll ever go to a better sporting event, and yet, I was there when the Blue Jays won the division series against Texas in 2016. It was bananas. B A N A N A S. I don’t think I’d ever hugged more random drunk strangers in my life.

That outdoor game in Michigan was unbelievable. Half the stadium was red, the other half was blue, and yet we all came together to sing Don’t Stop Believing.

The Leafs won the game in a shootout. I can’t tell you that I saw the puck go in the net, even though I was sitting at that end of the ice.

I saw Tyler Bozak come in on net. I saw him shoot. There was a half second delay…and then the crowd roared. That’s how I knew the puck went in. That’s how most of the crowd knew it went in.

It was the best experience imaginable. I walked out of there feeling like we had just won the last game of the season. No game after that could possibly be as important.

I don’t know how that game came across on TV, though I hear it made for great theatre. I’ve never gone back and watched it, outside of a few YouTube clips. I don’t want to ruin my memory of it.

Sports bring people together. You really feel that when you travel to a different city to watch your home team play.

In Cleveland, there was a sea of blue to watch the Blue Jays. I was apart of that. 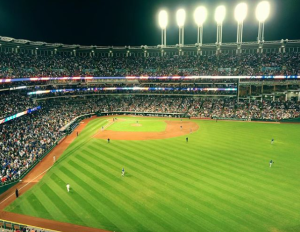 In Ottawa, there was a sea of blue to watch the Maple Leafs play. I was apart of that.

That is sport at its purest.

You know, I started this post by telling you that I don’t know what my life would be like without sports. And I don’t. I’m firmly in this bubble.

But when I look outside of this happy sports bubble, the world isn’t as happy. People aren’t as unified as two strangers at a sporting event who have to share a single arm rest for three hours.

There’s an unwritten rule when it comes to the arm rest. One person gets the front, the other gets the back. And if you take the whole thing, it’s only for a few minutes before giving it up.

I’ve become pretty familiar with the nuances of sporting events. Like the t-shirt toss. The whole thing is a farce, really. The entire point of it is to keep fans entertained and distracted, while the television networks have gone to a commercial break.

That’s it. They want to keep the energy in the building up and fill you with happy emotions that you’ll remember later. Unless you are a child, you’re not getting a t-shirt thrown to you.

It’s an elaborate ruse. Even if you’re an adult and catch a t-shirt, you’ll be shamed into giving it away to the closest kid.

Anyways, back to the “outside the sports bubble” thing.

Sports thrive off rivalries. We are told that it’s okay to hate other teams and their fans. So we do. But I feel like we do it in a civil way. It’s like a separate world with different boundaries.

If a player on an opposing team gets injured, the opposing fans will clap when they get up and head off. The rivalry is put on hold and respect shines through.

Sometimes I wish we could just grab that mentality, throw it outside the sports bubble, and hope it sticks. Alas, no. Debating is so much more fun, apparently.

Sports are their own story. And when the images are put with music to create a video montage, I’m all in. I could watch those on YouTube all night, and I have.

It’s about how it makes me feel. I wish more people could understand that feeling.

Sport is my compass. It is my alarm clock. It is my 7PM date. It is my bedtime story.

The frustration will take years off my life. The passion will give them all back. And the love will bring me back for both.

That’s me, in a nutshell.

What are you passionate about? What fills your 24-hour day?