When An Arena Gets A New Name

In Grade 4, I gave a speech on the Air Canada Centre. However, I forgot to mention there was a chance that Air Canada would lose the naming rights after their 20-year contract was up. My apologies.

Yesterday, Maple Leaf Sports and Entertainment (MLSE) announced they had agreed to a 20-year arena rights deal with Scotiabank, worth $800 million. As of July 1, 2018, the Air Canada Centre (ACC) would be renamed, Scotiabank Arena (ATM?). 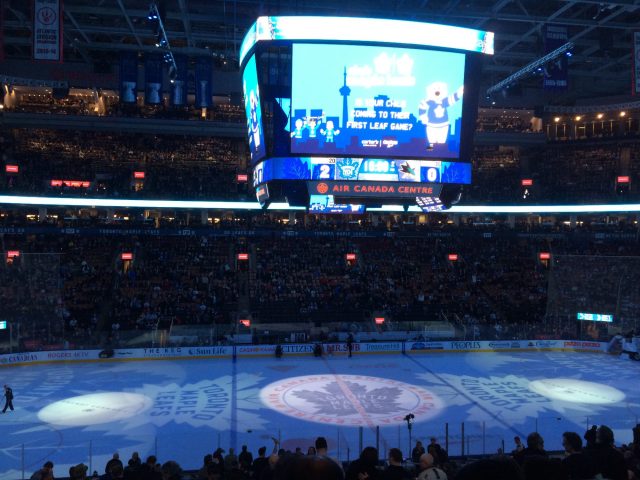 Inside the Air Canada Centre for a hockey game.

I knew this day was coming. I’ve thought about it on multiple occasions over the last few years, actually. My Sport Management brain wouldn’t allow me not to think about it.

That being said, I could tell that most people didn’t even know the renaming of the arena was a possibility. Many were shocked by the news.

Air Canada signed a 20-year naming rights agreement in 1999. Back then, the deal was worth $30 million. Oh, how times have changed.

Somewhere in my house there are photos of Little Paul making his one and only visit to Maple Leaf Gardens. I was adorable.

When the Leafs moved out, they had a parade down Yonge Street. They were due for a parade, having not won a Stanley Cup since 1967. This occasion felt like a good opportunity to have a dress rehearsal.

The following day, the Leafs played their first game in the new building against the Montreal Canadiens.

I still remember it. Todd Warriner scored the first goal in the new building at the 6:04 mark of the first period. I still remember my sister telling me a few days later that the Leafs Store was selling items that cost $6.04.

One thing that stood out to me though, was how dark the arena looked on TV. Maybe it was just the television cameras that needed to adjust their white balance, or something else, I’m not sure.

But watching the game, the ice looked grey. Watching a game on TV from Maple Leaf Gardens, the colours popped like a pack of pencil crayons.

I was too young at the time to know if there was any commotion over the fact that the new building wouldn’t be adopting the “Maple Leaf Gardens” name. I’m not sure how people felt about the rights being sold to an airline company.

Regardless, I thought Air Canada Centre was a pretty cool name.

With the Toronto Raptors also moving in and budding superstar, Vince Carter, on the team, he quickly earned the nickname: Air Canada Carter.

It all seemed so perfect.

In 2005, a mere ten minute walk down the street, SkyDome – the home of the Toronto Blue Jays Baseball Club, was renamed the Rogers Centre.

Rogers Communications Inc. is one of the main media and communications companies in Canada. They are everywhere. They own, seemingly, everything.

That was just a very small sample of Rogers’ properties.

Oh yeah, they also own a majority stake in MLSE – the company which owns four sports teams and multiple buildings, including the Air Canada Centre.

So there you go. Rogers is everywhere.

Back to the renaming of the Rogers Centre, though. Fans still don’t like the name. We still call it, SkyDome. We wouldn’t even be upset if they had called it the Rogers SkyDome.

But no, they had to take away a unique name. A name which was selected after a “Name The Stadium” contest, back in 1987. That’s right, a regular person chose the name. They received lifetime seats, for their efforts. Not bad.

Now, did we not like the name change because it went from a non-corporate name, to a corporate name? Sure, that probably has something to do with it.

For me, I just think SkyDome sounds better. It gives it personality.

After MLSE vacated the building, they refused to sell it to anyone who would use the building to compete with the ACC. Fair enough, except if you aren’t going to use a hockey arena for hockey, then what are you going to use it for?

A grocery store! Seriously. The place was turned into a Loblaws – Canada’s largest food retailer.

If you haven’t figured it out yet, the business side of sports doesn’t really care that much about tradition. Money is King.

At least they kept the Maple Leaf Gardens sign on the outside, which has since been updated.

In 2009, it was announced the arena would become the new athletic facility for the local Ryerson University. The Loblaws would stay, as would other retail shops, but an ice surface would be reinstalled, as well as a fitness facility and studios.

Basketball and curling tournaments have also been held there. I haven’t been in the building since 1999, but by all accounts, they did a good job of preserving the history.

As they should. It was built in five months and two weeks. Imagine that. An arena being built that quickly in 1931! Almost seems impossible.

I can’t quite put my finger on what it is exactly that pulls at people when they’re informed that an arena or stadium is being renamed. At its surface, it shouldn’t really matter. Right?

But just think if Fenway Park in Boston were all of a sudden named after a corporation. People would revolt.

Same goes for Yankee Stadium in New York. There’s a reason why they didn’t dare sell the naming rights to their new stadium in 2009.

Imagine if Wrigley Field in Chicago were renamed?

You just can’t do it. The tradition and historical importance is too strong.

For many of us, sport is a part of our identity. These arenas and stadiums are places we went as little kids, back when we thought the players were larger than life.

In a way, we grew up in these places. We have memories from these places. And even though the building is still there, the name is different. And that takes away from nostalgia, just a bit.

I mean, nothing special really happened at the ACC outside of a lacrosse championship. The Leafs never raised a Cup. The Raptors never sniffed a championship. I mean, Bon Jovi got a banner raised, but that’s a discussion for another day.

Over the last 20 years, it feels like the City of Toronto has been built around the ACC. Just look at all the apartment buildings that encompass it.

There were people on Twitter yesterday who hated the name change. A lot of them didn’t understand the concept of naming rights expiring. A lot of them were angry for different reasons.

“Scotiabank Arena” isn’t exactly smooth like peanut butter when it comes off the lips. There is no abbreviation. It is not easy to say, like the current venues in the city – ACC, BMO Field (Pronounced, B-Mo), The Dome (Rogers Centre), Ricoh (Ricoh Coliseum).

Scotiabank Arena, in many ways, isn’t our own.

Ottawa’s hockey arena used to be called, Scotiabank Place. Out in Calgary, their arena is called the Scotiabank Saddledome. And now, we are Scotiabank Arena.

On the other side of Twitter, people can’t understand why anyone would be upset about a name change. Their argument is – “You’re going from one corporate name to another, what’s the difference?”

I guess for 20 years, I never saw “Air Canada Centre” as a corporate name. It just felt like home. Now you throw the word “bank” in the title and it makes you think of “money” before “home”.

Hey, good for Scotiabank for acquiring the rights. From a business perspective, that is an incredible coup. The brand awareness they receive from this will be incredible.

Just think how many times a broadcaster will say, “We are live from Scotiabank Arena” as a camera pans over the outside of the stadium with their logo. That’s the money shot. Literally.

I’ll be honest, the name has to grow on me. I think “Scotiabank Centre” has a better ring to it. The word “Arena” feels awkward, but I can see why they wouldn’t want to have “Centre” in the name – that would remind people too much of the previous name.

I also saw a suggestion that they should’ve named it, Scotiabank Gardens. However, that would allow people to refer to the arena as simply, “The Gardens”.

From a corporate perspective, you can’t have that. If Scotiabank is paying $800 million, they need their name mentioned. Perhaps that’s why they never went with “Rogers SkyDome”. They knew we’d just call it SkyDome.

I grew up with the ACC. I liked it before it even opened, as evidenced by my Grade 4 speech. It’s the place I always wanted my Dad to take me. So, for me, I’ll always know it as the ACC.

That being said, I’m sure there are little boys and girls who will grow up with the Scotiabank Arena being the place they beg their parents to take them.

Who knows, they may even write a speech about it.

I think of my blog as an all-you-can-read buffet. There's something for everyone and complimentary mints at the door as you leave.
View all posts by Paul →
This entry was posted in Sports and tagged About Me, Air Canada Centre, Anecdote, Business, Culture, Fandom, Identity, Life, Maple Leaf Sports and Entertainment, Nostalgia, Scotiabank Arena, Sport, Thoughts. Bookmark the permalink.

18 Responses to When An Arena Gets A New Name