Let me take you back to Grade 6. My class was having a Spelling Bee. Participation was optional. If you wanted to compete, you were to study the words in the textbook. I decided I didn’t want to participate.

The day of the Spelling Bee arrived and everyone who wanted to spell words went to the front of the class. My teacher saw that I didn’t go up and encouraged me to join. So I did.

The winner was going to receive a gift card to a bookstore.

I made it to the Final 2, without studying. We took a break for recess.

The other finalist came up to me at recess and asked if I could just let them win because I “don’t even read books” and they could use the gift card more than I could.

I ended up losing the Spelling Bee. I didn’t throw it. I just didn’t spell my word correctly. I wish I could remember what the word was. I’d probably put it on a t-shirt, or make sure I never use it in my daily vocabulary.

Contrary to the belief of my competitor, I did read books. I loved books. I was in the book club at the library every summer. That consisted of me reading books and giving the librarian a synopsis.

I even read the sports section of the newspaper just about every day.

The other day I read the sports section of the newspaper for the first time in months, maybe years. I didn’t enjoy it anymore. The writers felt like they were trying to show off by using adjective after adjective. It felt like I was reading something that had become a chore to them. They didn’t feel connected to their words.

I didn’t publicize my passion for reading back then. Didn’t feel like I had to. I was known as the sports kid. Surely, no kid who wore a sports jersey to school once a week had any patience for books, right?

That always infuriated me, and still does.

Even in university when I majored in Sport Management, I always felt like I was looked at as lesser than someone in science or a “smart” subject.

“Oh what do you do in lecture, look at highlights and talk about stats?”

And I’ve always felt the need to prove myself, that I’m not just this person obsessed with sports, but I have interests and capabilities beyond that.

You see these Bachelorette recaps I write? I find joy in them and I’m glad there are people who get a laugh out of them. But I’d be lying if I said that’s my only reason for doing them.

A big part of it is me revealing something about myself, that people may not have expected, and forcing others to think twice about the stereotypes they have in their head.

I mean, guys don’t watch The Bachelor. They mustn’t. That’s a girly show. Guys who watch sports definitely don’t watch it. They’re too brain dead to change the channel.

I could write a blog post tomorrow about two raindrops racing down the window, just to catch you off guard. Of course, I can’t now. But wouldn’t that have been unexpected?

You’ve had some time to think about it, so I’ll ask again.

Now, that may be an unfair question. But I want an answer.

Thinking back to elementary school, there were some kids who brought books to school and read them during free periods or recess, but as a whole, reading didn’t seem very popular.

Maybe that’s just kids being kids and having too much energy to focus on books. Or maybe they were like me and read books at home, instead.

Everyone got excited about the Scholastic Book Fair, I know that much. Perhaps it was because of the cheap posters and chance to win a raffle prize.

I was one of those raffle winners. I still have the image in my head of putting my ballot in the box and knowing in that moment that I would win. Just one of those premonitions I’ve had that I’ve written about before.

I won a Spongebob Square Pants poster. I had no use for a poster and I never saw more than five minutes (unwillingly) of Spongebob.

A lot of people go through school without reading any books outside of the ones they are assigned. I was that way when I got to high school. I didn’t do any outside reading. It felt unnecessary. Excessive, even. I didn’t want to strain myself, right?

When university rolled around, I brought three books with me when I moved into residence in first year. I told myself I would read them when I had spare time. They sat on my bottom shelf and collected dust.

I brought the same three books back for second year and said the same thing.

I brought the same three books back for third year and said the same thing.

I left them at home for fourth year. There was no point. Spare time? I barely had time to sleep.

Somewhere between the end of Grade 8 and the end of university, “reading” turned into a dirty word. I didn’t want to hear it. I’d look at the syllabus and see that I had to read 30+ pages by the next seminar and I’d find every way to avoid it, or get it over with as fast as possible.

There wasn’t much enjoyment. I was sabotaging myself, but it didn’t feel that way. It felt like I was being forced to read something that I didn’t want to read.

I was becoming that Grade 6 stereotype of “you don’t even read”. It was true. I didn’t. I was tired of reading.

I would scroll through Facebook and Twitter, reading poorly written thoughts by people I no longer knew. I would read texts that I’d have to fill in the gaps for. I would proofread my group member’s work and make corrections.

So many words, but nothing was ever perfect.

It wasn’t until I graduated that I regained my desire to read. My desire for learning something, on which I would not be tested. I had lost that somewhere between the late night McDonald’s runs and early morning fire drills.

I enjoy non-fiction books that are sport-related.

The behind-the-scenes aspect of sport has always intrigued me. Reading the words directly from an athlete or broadcaster, helps answer the questions in my head. It feels like a personal connection between myself and the author.

They aren’t telling a story, they are sharing one. There’s a difference.

Think of it this way:

I’m talking to you in a room full of people. Everyone is off chatting with someone else. It’s just us in our own bubble. I’m sharing a story with you, only you. All of a sudden, Johnny Big Ears joins the conversation. Then the story becomes less personal. I hold back on all the details. I paraphrase the parts that Mr. Big Ears missed. I am now telling a story. I’m not sharing one.

And if I’m honest with you, and myself, I’d say that I’ve taken that same philosophy with this blog. It’s so much more meaningful when it feels like I’m talking to one person, rather than multiple.

That’s how I try to write. Sharing, not telling.

I’ll walk into the bookstore and book it past the Travel section (that was two jokes in six words, keep up), ignore the History and Political Science sections because of covfefe, and find myself in my happy place. The Sports section. 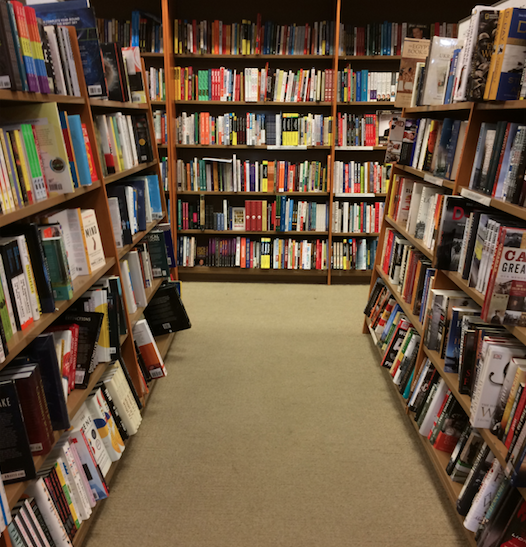 I chuckle when I see that it’s right next to the Humour section. This is my comfort zone. The supposed “dumb people” section of the bookstore.

What can you learn from sports and humour? The intellectuals aren’t rushing to that section. No wonder it’s in the back corner.

The question does not matter. You should’ve been screaming that the first time you saw it. The only thing you should care about being cool is the other side of your pillow. That’s it.

Because what is cool?

It is a word we all associated to a group of kids at school, and chances are, none of them had books in their hands. Am I wrong? Therefore, the ones who did have books were uncool.

Being a “bookworm” is associated with being a “nerd”. And if you’re a nerd, you can’t be cool, right? It goes against the definition.

But why? So what?

Why is butchering the English language on social media so widely accepted? You can type out words faster than you can write them, why do you insist on using abbreviations and shortcuts every chance you get?

Doesn’t it take more effort to spell a word wrong, than to spell it right?

It makes no sense to me. What is this culture of stupidity that we are fostering?

People graduate from college and university every year, and they can take all the fancy photos they want, but deep down, I promise you, most of them can’t put three written sentences together to save their life.

Quick shoutout to those of you who own a Kindle.

What I do know, though, is that reading is a nice change of pace.

I think that’s cool, even if others do not.

I think of my blog as an all-you-can-read buffet. There's something for everyone and complimentary mints at the door as you leave.
View all posts by Paul →
This entry was posted in Life and tagged About Me, Books, College, Fiction, Hobby, Humor, Identity, Nonfiction, Opinion, People, Reading, Spelling Bee, Thoughts, Writing. Bookmark the permalink.

47 Responses to Is Reading Cool?