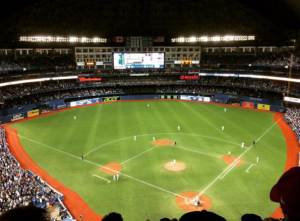 I have goosebumps just thinking about it. There are chills running through my body that cannot be mitigated by a sweater or blanket. I don’t know if I should smile, laugh, shake my head, or just sit here and cry.

And let me stop you before you get all judgmental and mock me by saying, “Oh, it’s just a game. It’s just a sports team.” Because you’re wrong. This is more than just winning a game. Trust me, it is.

I grew up loving this team. I didn’t need a fancy hashtag back in 1998 to show my pride and loyalty. I was seven-years-old and the Blue Jays were the team I watched every single day throughout the summer. If I had to miss a game, it was the end of the world.

A baseball game can give the impression that nothing is happening, while everything is happening. The fielders stand still. The pitcher stares at the catcher, who crouches behind the batter, who stares at the pitcher. At its surface, baseball is a lot of staring, spitting, and scratching. Yet at the same time, a million different scenarios are running through the minds of the players and coaches.

When the pieces are set in motion, instincts must take over. If you have to think, it’s too late. That’s what I love about the game.

I had only been on this earth for one year when the Blue Jays won their first World Series in 1992. The following year, they did it again. I was two-years-old. If you’re keeping score at home, that’s 24 months.

Needless to say, I don’t remember any of it.

In my grandparents’ basement, there used to be two picture frames on the wall. One was a Blue Jays team photo from 1992; the other was a team photo from 1993. I was about 10-years-old and no visit to their house was complete without a trip down to the basement to look at these photos.

My grandfather and dad provided the history lesson. They pointed at different players and shared a story about them. I stood there and nodded my head. At the time, it never occurred to me just how recent 1992 and 1993 were. In reality, it had only been about eight years.

Now, it’s been twenty-two years. Twenty-two years since the swing and a belt to left field, when Joe Carter touched them all, and SkyDome went ballistic. Twenty-two long years. Since then, the playoffs have been a rumour. A myth. A cherry that never went on top. A dance that we were never invited to.

So when the Blue Jays recorded the final out and officially clinched the division, I was overcome with a million emotions, yet completely numb at the same time. This was really happening.

In my lifetime, I’ve watched thousands of games across numerous sports and I’ve never been so happy about the final score as I was last night. It was a level of euphoria that people probably reach on their wedding day. And there I was just sitting on a couch, staring at a TV, watching grown men celebrate a playoff berth by spraying champagne all over the place.

When you wait forever, for a moment that you’re not even sure will ever happen, and then it happens…well, there’s nothing more beautiful than that.

I’ve been writing this blog post for about an hour now and the goosebumps and chills have yet to subside. I don’t think they can.

I know there are many fans who feel the same way I do. Whether they’ve been following the team for many years, or just a couple of months. It doesn’t matter. We all cheer for the same team.

One week from tonight on October 8th, the Blue Jays take part in their first playoff game since 1993. A home playoff game, no less. I’m fortunate enough to have a ticket to that game. If I could enter the stadium right now and sit in my seat until the game starts, I would.

The atmosphere is going to be like nothing I’ve ever seen before. There won’t be a word in the dictionary to describe it. It will be loud. It will be rowdy. And the roof will be blown off the stadium.

That’s not a cliche.

I think of my blog as an all-you-can-read buffet. There's something for everyone and complimentary mints at the door as you leave.
View all posts by Paul →
This entry was posted in Sports and tagged Baseball, Canada, Childhood, Culture, Fan, Fandom, Life, Love, MLB, Personal, Playoffs, Reflection, Thoughts, Toronto Blue Jays. Bookmark the permalink.