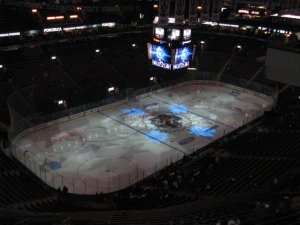 When I was 6-years-old, I went to my first baseball game. My Dad and I had great seats; I remember the view. We were about 20 rows up from the dugout. I ate McDonalds, stood for the national anthems, and fell asleep in my Dad’s lap. That was the extent of my experience. I was asleep before the first pitch.

When I was in Grade 2, my class had an ant farm and each student got to name an ant. I named mine, Jose Cruz Jr. – the starting centre fielder for the Toronto Blue Jays at the time. Ridiculous, right?

That same year, my school held a “Toronto Blue Jays Day.” Everyone got a hat and stickers and some of the players came to the school. Then I found out that the players were only there to talk to the kids in Grade 4-8. I was so disappointed. Did they think I was too young to know who they were or what was going on? Yeah, I’m still mad about this.

In Grade 4, we were introduced to speeches. Every student had to stand in front of the class for 3-5 minutes and talk about anything they wanted. I’m telling you, three minutes felt like an eternity back then. Five minutes felt like two eternities.

The topic I chose was the Air Canada Centre. That’s right, the home arena for the Toronto Maple Leafs and Toronto Raptors. The ACC had been open for about a year and I felt like it was my duty to tell everyone about it. Not really, I just thought it was really cool. My parents cut articles out of the newspaper with all the facts about the arena. Yeah, newspapers. Very old school. Very 14 years ago.

In Grade 5, my speech was about the Canadian Men’s Olympic Hockey Team in Salt Lake City. Again, I got my information from newspapers. I also used a Maclean’s magazine that was a special edition about the team. I still have that magazine.

In Grade 7 my speech was on “A Day in the Life of the Toronto Maple Leafs.” I had come across a book at a bookstore with this title. It had behind the scene pictures. It had daily routines of the players. It had itineraries. It had everything. The book was $75. My parents wouldn’t buy it for me. Fortunately, the newspaper had a feature on the same topic.

I’ll always have a soft spot for newspapers. Without them, who knows what I would have talked about for 3 minutes in front of my classmates all those years.

In Grade 8 they switched up the speech format and told us we had to talk about an issue. Fantastic. Now how am I supposed to incorporate sports into this? Oh, I tried. My topic was obesity. I hated it. It wasn’t fun at all. Instead of listing off how many televisions were in washrooms, I had to stand up there rhyming off death rates and non-sporty things.

Sports were a big part of my life. I was watching everything. No one ever sat me down and taught me the rules of different sports. I taught myself everything by watching. Summer nights were spent watching baseball; hockey, basketball, and football took over from fall thru spring.

Ask me what my favourite sport is and I’ll reply with the one that is currently in season.

But it wasn’t just the Big Four sports that I was interested in. I would wake up at 8AM on Saturday mornings to watch Formula One Racing. Those were the days when Michael Schumacher dominated the sport.

Sports like Curling and Lacrosse also caught my attention. I’ve always felt that people would love Lacrosse if they just gave it a chance, or maybe I’m biased.

When I was young, I got a “Baseball For Dummies” book for my birthday, which still sits on a shelf in my room. That shelf, by the way, is filled with dozens of Sports Illustrated magazines and Maple Leaf player guides and programs from various games. The oldest book on the shelf is from 1998. I have a problem.

Since I’m on the collecting/hoarding topic, I also have every ticket to every sporting event I’ve ever been to. I didn’t plan on collecting them; I just never threw them out.

Regular subjects in school never really interested me. I was bad at Science. I found History boring, unless it’s sports history, but noooo why would they teach that in school? Geography was alright. I thought I was good at Math…then high school happened. I always enjoyed English, just as long as I could express my own thoughts and write the way I wanted to write.

Side note: If you really think about it, sports are a combination of those subjects.

So when it came to applying to Universities, my decision was easy. Sport Management. Why? Long story, short – it had the word “sport” in the title. Finally, where has this class been all my life?

I’ve met people that tell me they don’t follow sports. And in those moments I try to put myself in their shoes and hypothesize what exactly I would do with my time. I always draw a blank.

From the moment I wake up in the morning to the moment I go to sleep at night, I’m doing something that relates to sports. I don’t know how to live any other way.

I’ve been this way my entire life. Even as I write this, I have my eye on the time so I finish writing this before an MLB playoff game starts.

I think of my blog as an all-you-can-read buffet. There's something for everyone and complimentary mints at the door as you leave.
View all posts by Paul →
This entry was posted in Sports and tagged Addiction, Life, Lifestyle, Opinion, Personal, School, Sports, Thoughts, WPLongform. Bookmark the permalink.

2 Responses to Addicted to Sports